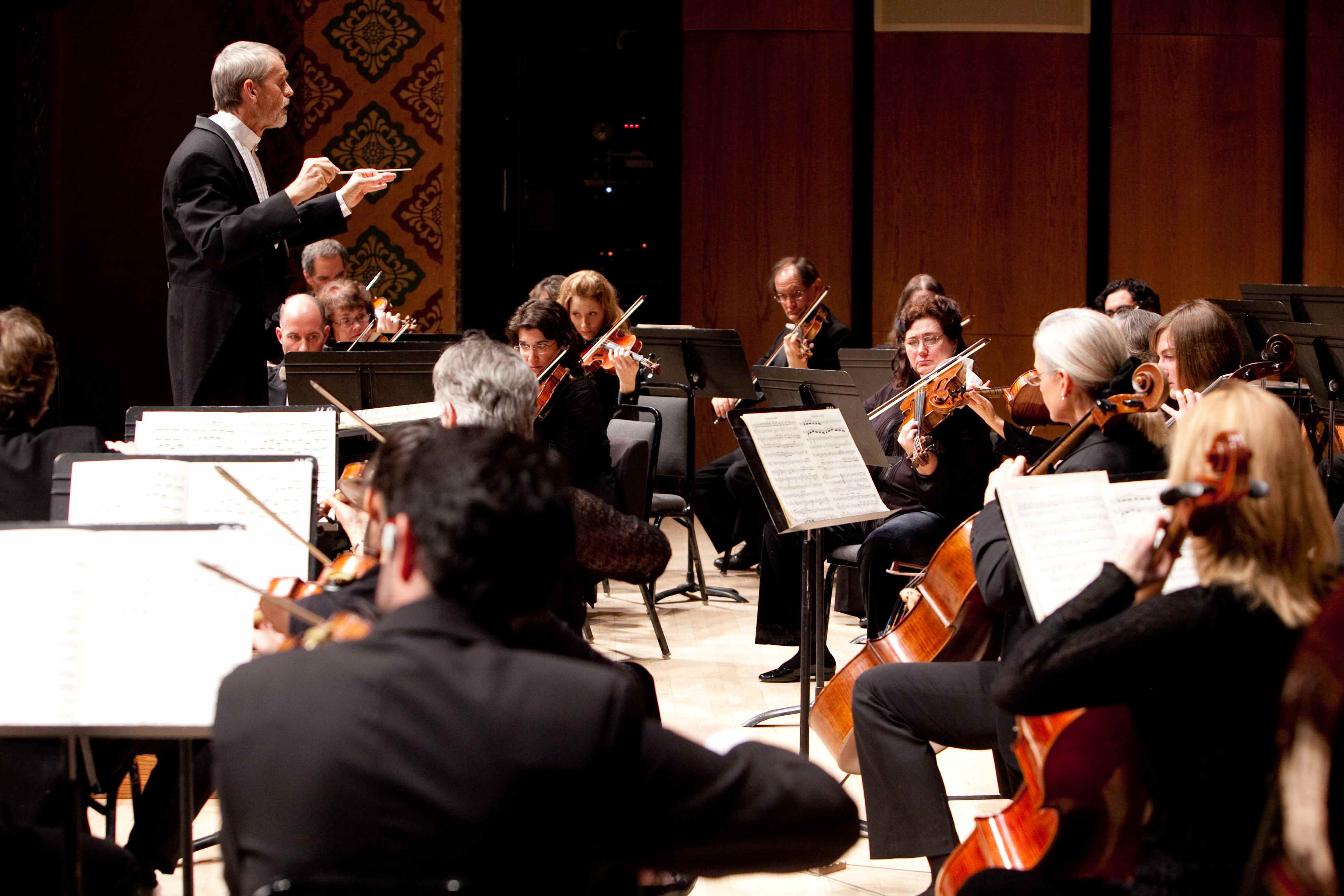 Santa Fe Pro Musica opens its 33rd Season in grand fashion this September at the Lensic Performing Arts Center with the Santa Fe Pro Musica Orchestra performing Beethoven’s iconic Symphony No. 5 in C Minor and lyrical Piano Concerto No. 3 under the baton of Thomas O’Connor, featuring Steinway Artist Melissa Marse. There can be no better way to start off an exhilarating season of orchestral, chamber, and period music performance than with this famous musical quote: “Da da da DUM!”

MEET THE MUSIC with Music Director Thomas O’Connor and special guest John Clubbe one hour before each concert at the Lensic (free to ticket holders). Learn more about the music you love!

“This C minor piano concerto is one of a handful of works in which the spirits of Mozart and Beethoven convene” (Phillip Huscher, Chicago Symphony Orchestra). It is particularly indebted to Mozart’s Piano Concerto K. 491 (which Santa Fe Pro Musica will perform on Classical Weekend, January 24 and 25, 2015). During a rehearsal when Beethoven first heard Mozart’s revolutionary K. 491 concerto, he exclaimed to his colleague Herr Cramer, “Ah, we shall never be able to do anything like this!” That didn’t stop him, but instead provided inspiration and motivation. Beethoven’s third piano concerto shows a keen awareness of Mozart’s K. 491 concerto. Both are in the same unusual key of C minor and share themes, details, musical treatments and conceptions.

Beethoven worked on his Piano Concerto No. 3 from 1799 to 1802 and performed it on April 5, 1803. The instrumental parts were ready in time for the concert; however, he had not finished writing out the piano part for himself. Ignaz von Seyfried was the page turner for Beethoven during this performance and reported:

“In the playing of the concerto he asked me to turn the pages for him; but – heaven help me! I saw almost nothing but empty pages; at the most on one page or the other a few Egyptian hieroglyphs wholly unintelligible to me, scribbled down to serve as clues for him; for he played nearly all the solo part from memory, since, as was so often the case, he had not had time to put it all down on paper. He gave me a secret glance whenever he was at the end of one of the invisible passages and my acute anxiety not to miss the decisive moment amused him greatly and he laughed heartily afterwards when we ate a jovial supper together.”

Between the years 1804 and 1808, Beethoven composed an astonishing amount of great music including, symphonies 3, 4, 5 and 6, Piano Concerto No. 4, the Violin Concerto, the Appassionata Sonata, and the three Razumovsky String Quartets. His Symphony No. 5 was completed early in 1808, followed by his Symphony No. 6 later that same year. These two symphonies were premiered in Vienna on December 22, 1808.

Concerning the new “grandiose dimensions” of Beethoven’s symphonies, Charles Rosen writes (The Classical Style, 1971): “It is clear that such an increase in size without altering the fundamental classical proportions could not start from the long, regular and complete melodies of Mozart, but had to base itself on Haydn’s treatment of tiny motifs. Musical ideas that form a complete whole in themselves – tunes, in short – were rarely of any use to Beethoven in his dramatic expansions of Mozart’s form.” Beethoven’s Symphony No. 5 is one of classical music’s most popular and recognizable works partly because of the famous four-note motif with which it opens; a tiny motif of great power! Ever since Beethoven composed the symphony, commentators have attempted to give that motif some extra-musical significance. Beethoven’s friend Anton Schindler, presumably quoting the composer, said it represented “Fate knocking at the door.” Carl Czerny, one of Beethoven’s students, claimed “the little pattern of notes had come to Beethoven from a little bird’s song [specifically, Picidae, Northern Flicker, or “yellowhammer”] heard as he walked in the Prater Park in Vienna.” One new theory is expressed in Matthew Guerrieri’s new book The First Four Notes (2012): “The rhythmic foot – short-short-short-long – was known in Classical antiquity as a quartus paeon.” Beethoven, who revered the Greek poet Homer, would have known of this particular paeon as a hymn to Apollo and also about its martial connotation, applied to songs sung by armies heading into battle or giving thanks for victory. Guerrieri continues, “The ancient Greeks would have appreciated the quartus paeon as a source of the Fifth Symphony’s oft-cited rhetorical power.” Whether it has a programmatic significance or not, the motif unquestionably has musical importance as it recurs throughout the entire symphony. Beethoven uses this four-note motif as a germinal idea that regenerates into new phrases, forms and guises.

This famous motif is the main subject of the opening movement, Allegro con brio (fast, with fire), a movement that has been called “a stirring, dogged and desperate struggle” (Hermann Kretzschmar, 1848-1924). The contrasting slow movement, Andante con moto (flowing, with motion), is constructed around a long two-part melody with a series of variations. The third movement is laid out in typical three-part scherzo form. In its outer sections, it makes use of the “Fate Theme.” The middle section is a ghostly fugue. After the Scherzo returns, the music intensifies and sweeps us along with a dramatic crescendo and a sudden brightening (C Major). Here Beethoven creates a dramatic and suspenseful transition directly into the noble Finale. Piccolo, contrabassoon and three trombones now make their first appearance.

Pianist Melissa Marse performs extensively worldwide and in American venues including Alice Tully Hall, Merkin Hall, Pierpont Morgan Library, Carnegie Hall, Steinway Hall, and the Gardner Museum. Her Carnegie Weill debut recital (with the Lincoln Piano trio) was presented by the late Isaac Stern in 2001. Additionally, she has been a returning guest artist for CarnegieKids, and was music director, coach, and pianist for the Metropolitan Opera’s Growing Up With Opera. She collaborates with members of the New York Philharmonic, Hong Kong Philharmonic, London Symphony, Berlin Philharmonic, and Boston Symphony, and for three years has played in the Mark O’Connor Piano Trio. Read more at www.melissamarse.com.

Santa Fe Pro Musica, founded in 1980, is a non-profit performing arts organization dedicated to inspiring and educating audiences of all ages through the performance of great music. Pro Musica performs a varied repertoire, covering four centuries of music on modern and baroque instruments, including works for chamber orchestra, small ensemble and large-scale works for orchestra and chorus. In 2008, Pro Musica’s recording of Gustav Mahler’s Das Lied von der Erde (chamber arrangement by Schoenberg) was nominated for a GRAMMY® award in the classical category of Best Small Ensemble Performance. In August of 2012, Santa Fe Pro Musica Recordings produced a CD of Conrad Tao, pianist, performing Mozart Piano Concertos No. 17 and No. 25. In addition to gaining national recognition over its 32 years for its artistry in performance, Santa Fe Pro Musica offers some of the most distinguished educational opportunities in northern New Mexico, reaching thousands of students every year with a Youth Concert series, a team-building, ensemble-training program, and a master class series for New Mexico School for the Arts students.